At Darwin airport in Australia, Victor Ryker slid his Dutch passport across the desk to the Aboriginal Customs official. As the officer checked the declaration form, he looked the burly blonde man over. ‘Mister Van Heer – no smoking in the arrival’s hall.’

Ryker paused briefly, caught out by the use of the false name in the passport. He said nothing, then used his mechanical hand to grip the small cigar, took a last drag and stubbed it out on the side of the customs desk.

The malice in the stranger’s pale blue eyes checked the Customs officer’s rebuke. ‘The binoculars you’ve declared, value – $600? I’ll have to see them.’

Ryker unzipped his bag and lifted them out.

The officer stamped Ryker’s card and cleared him through. He checked Leonid Berkei’s passport. Strangely, the Bulgarian document was stamped, ‘not valid for Africa’. The officer glanced at the huge man with the Stalin moustache. He stood motionless; an unshaven tattooed chunk of chiselled Bulgarian basalt. He wore khaki fatigues; the shirtsleeves rolled up revealing a tattoo of an owl brandishing a dagger. The Customs officer could not identify the emblem. Only one in a thousand westerners would recognise the symbol of Russia’s SPETSNAZ and the destructive force it represented. He cleared the Bulgarian and Kim Hysan, his North Korean travelling companion through.

They were picked up outside by a well-built Australian in a Land rover. Steve ‘Semtex’ Saggers was an ex-SAS commando and like the other three mercenaries, a highly trained Special Forces soldier.

Ryker wasted no time. ‘Did you get everything, Semi?’

Saggers partly avoided the question. ‘I’ve leased the biggest low-loader I could find. It’s got a power winch and rear ramps to take the ‘dozer.’

‘How big is the bulldozer?’ Berkei enquired.

‘No worries.’ Saggers stopped the Land rover outside a fenced yard, just across the highway from the airport. The low loader, bulldozer and a helicopter all waited inside. ‘The only problems are the helicopter and foil weather balloons. That’s the only chopper I could lease on short notice, an old Bell 47 used for cattle mustering. It’s a three seater though and should do the job.’

Ryker studied the equipment then turned back to the Australian. ‘What about the weather balloons?’

‘Couldn’t get ‘em, but there’s a stack at the weather station over there, on the far side of the airport. No real security, shouldn’t be a problem . . . but I’ll need some extra cash.’

‘Same with Tindal airbase. Unbelievable for a military installation, no surface radar, no perimeter alarms or patrols – just a three metre fence topped with doubled barbed wire and a drainage trench.’ Ryker paused. ‘Why do you need extra cash?’

‘It’s been difficult organising this and besides, I had to bribe additional parties.’

‘Another twenty thou’ should do it.’

Ryker suppressed his anger and sidestepped the issue. ‘You still an ace with explosives, Semi?’

‘I’ll agree to your price if you’ll do some extra work.’

Saggers looked elated and relieved. ‘You name it.’

‘I want you to cover our trail so any investigation is delayed.’

‘Four separate half kilo Semtex packs, each with integral radio activated detonators and two remote control transmitters to detonate them.’

‘No, you’ll be flyin’ the chopper back. I’ll set ‘em after we take what we need and you can detonate ‘em once we’re all clear. I’ll need the Semtex tonight, that okay?’

‘No problem.’ Saggers replied as he dropped the three men off at the Darwin Hilton.

Within six hours, ‘Semi’ Saggers returned with the specified explosives and remotes. ‘Right, it’s all set up and ready to go. All you need to do is arm it.’ As he handed the packs over he changed the subject. ‘Viper, when do we get paid?’

‘After the job’s done, fly back to Darwin. Meet us here at the bar ten next morning.’ Ryker packed up the explosives. ‘Make sure you get the balloons tonight. I’m headin’ off now, I want to check the truck and ‘dozer over before we go and especially the chopper.’

Twenty hours later each man attended to his pre-arranged duties. Saggers knew the top end well and drove confidently down the Stuart highway, heading for Katherine with fifteen newly acquired metal foil weather balloons and a large amount of block ice. He steered the Land rover off the main road onto a dirt track. Saggers found a shady spot in the bush, just north of Tindal Air Force Base. He turned off the Land rover and relaxed, daydreaming about how he would spend his newfound wealth.

Kim Hysan trailed Saggers by three hours. The slim Korean sweated behind the wheel of the big low-loader hauling the huge Caterpillar bulldozer. He had stopped only briefly to pick up a load of tarpaulins, then at a disused quarry to brim the bulldozer’s bucket with crushed rock. Hysan soon found the prearranged meeting point and settled back awaiting Saggers arrival.

Ryker had flown nearly every type of helicopter currently in military service. The old Bell 47 seemed primitive, compared to the hi-tech combat machines he was used to. Though one of the most skilled gunship pilots in the world, he had lost his edge. The powerful mechanical hand responded correctly but never matched the skill and dexterity of his arm blown off in Angola. The special rechargeable nine-volt batteries amplified muscle and nerve response a million times over. Featuring a wrist with 360-degree rotation, it provided little more than a novel party trick and unbeatable arm wrestling. That was his well-kept secret. He survived on his reputation.

Accompanied by Berkei, he flew the Bell from Darwin to a secluded spot between Katherine and Tindal air base. Night approached as they waited for the arranged conditions.

Typical of the tropics, the sun set quickly and dramatically, resulting in a very dark moonless night. Ryker switched his sophisticated radio to the air base frequency.

As ordered, Saggers inflated and tethered each foil balloon to a nylon string bag containing a ten-kilo block of ice. He repeated this process fifteen times in a random pattern along side roads to the north of Tindal air base. The predetermined melt rate before auto release of the balloons then lift off was five hours.

Ryker turned to the Bulgarian and started the engine of the Bell. ‘That’s it, time to go.’

They both fitted nightscope goggles and armed their machine pistols. The helicopter lifted off and charged forward at treetop level, well below the airbase radar.

The base security seemed totally absorbed by the apparent sudden invasion. Ryker smiled. ‘All warfare is based on deception’, he quoted Sun Tsu’s Art of War.

They crossed the perimeter fence on the sparsely occupied western boundary and dropped lower to avoid the base radar. The Blackhawks were out of sight, probably well off to the east. Ryker flew directly toward the two isolated hangars and their confiscated cargo. They landed half a kilometre to the north and shut down. Both mercenaries checked their knives and automatic weapons then climbed out into the quiet humid darkness. 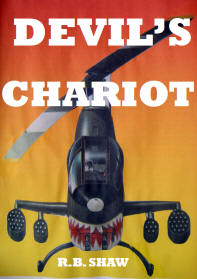